Named after Civil War general Benjamin Franklin Tracy, this narrow fjord is located approximately 50 miles southeast of Juneau. Breathtaking Tracy Arm extends over 30 miles long, with nearly a quarter of its area covered in ice. In fact, it encompasses some of Alaska’s largest glaciers, including the twin Sawyer glaciers, which often expel enormous chunks of ice into the waters below in a magnificent process known as calving. During the summer when Princess ships visit, icebergs float along the surface of the glistening water in an array of sizes, from just a few inches up to three stories wide. 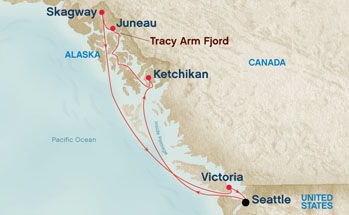 7 Days Seattle to Victoria, Inside Passage with Tracy Arm Fjord