Whittier, approximately 65 miles southeast of Anchorage, lies nestled at the base of the Chugach Mountains bordering Passage Canal. Established as a World War II port for cargo and troops of the Alaska Command, Whittier remained activated until 1960. Today, Whittier’s economy and its 290 residents rely largely on the fishing industry, the port and, increasingly, on tourism.

Once accessible only by boat or via a war-era railway tunnel, The Anton Anderson Memorial Tunnel was recently enhanced to accommodate highway traffic as well, making it the longest highway/rail tunnel in North America at 2.5 miles. 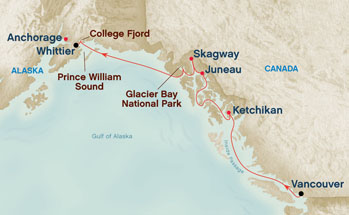 Voyage of the Glaciers Northbound