Begin your Myanmar adventure in Yangon where you will embark upon a 14-night downstream cruise. Explore fabled cities, enjoy the spectacular view from the Mt. Popa summit, and visit artisan workshops, sacred sites, colorful markets and hushed monasteries. Take an in-depth tour of Bagan and stop at small delta towns and villages before your voyage concludes in Mandalay.

Day 1Â Â  Â ARRIVE IN YANGON, MYANMAR
Welcome to Yangon, a former royal capital known as the Garden City of the East, for its lush tropical setting. After boarding the ship, your afternoon sightseeing excursion includes: the city center and Sule Pagoda; a photo stop at Kandawgyi Lake; Bogyoke Aung San Market (Scott,™s Market), where you can shop for handicrafts, clothing and local delicacies; the massive reclining Buddha at Chaukhtautgyi Temple; and Shwedagon Pagoda, one of Myanmar,™s top religious sites. Tonight, meet your fellow travelers at a Welcome Dinner. (D)

Day 2Â Â  Â MAUBIN
Enjoy a tour today of Maubin, a small delta town and the birthplace of Myanmar,™s first head of state, Dr. Ba Maw. You will also have time to visit the local market before returning to the ship. (B,L,D)

Day 3Â Â  Â DANUPHYU ,“ ZALON
You will have an opportunity today to explore Danuphyu, site of a Burmese uprising during the First Anglo-Burmese war. Later, the ship continues cruising through the Ayeyarwady Delta region, stopping to visit the small port town of Zalon. Enjoy seeing the sights by trishaw, including Pyitawpyan Pagoda and its famous wish-fulfilling, bronze Buddha, stolen by British soldiers years ago and later returned by order of Queen Victoria. (B,L,D)

Day 4Â Â  Â MYANAUNG
Today the ship arrives in Myanaung, a quiet riverside town where a walking tour will take you past well-preserved colonial-era houses. You will also have an opportunity to visit the town,™s bustling market before returning to the ship. (B,L,D)

Day 5Â Â  Â PYAY
After the ship arrives in Pyay (Prome), take a walking tour of this former capital that once served as an important junction between Lower and Upper Burma. Pyay is home to more than 80 gilded pagodas, including Phayamar Pagoda and Shwesandaw Pagoda, one the country,™s most revered religious sites. Later, take an excursion to the ancient Pyu capital of Sri Ksetra. (B,L,D)

Day 6Â Â  Â THAYETMYO
Thayetmyo is a pleasant town that once guarded the border between Royal Burma and British Burma after the Second Anglo-Burmese War of 1855. It has a number of well-preserved colonial-style houses and buildings dating from the mid-1800s, including a covered market. (B,L,D)

Day 7Â Â  Â MINHLA ,“ MAGWE
Further upstream today, the ship will stop at Minhla, site of a great battle during the Second Anglo-Burmese War. Take a small local boat to visit Gwechaung Fort and Minhla Fort, built by Italian engineers in 1860 to keep British forces out of Burma. Later, visit Magwe, where you may walk up to the ornate hilltop Myathalun Pagoda, constructed with thousands of solid gold bricks and housing numerous shrines devoted to nats (Buddhist spirits). (B,L,D)

Day 8Â Â  Â SALAY
The ship cruises to Salay (Sale) today, a small community that boasts more than 50 monasteries. Visit Yokesonekyaung, built in 1882 and the region,™s oldest surviving wooden monastery, famous for its wood carvings and collection of religious artifacts. You will also see a splendid colonial-era house and the Man Pagoda, which contains the largest lacquer Buddha in Myanmar. (B,L,D)

Day 9Â Â  Â THANTKYI ,“ BAGAN
Join your fellow passengers for an excursion up Thantkyi Mountain to visit Thantkyi Pagoda. Later, the AmaPura,™s Sun Deck offers the perfect vantage point for your first glimpse of the plain of Bagan (Pagan), one of the world,™s most awe-inspiring archeological sites. On your initial sightseeing foray here, visit Ananda Temple, a well-preserved masterpiece known as the Westminster Abbey of Burma,, and Shwezigon Pagoda, the holiest site in Bagan. (B,L,D)

Day 10Â Â  Â BAGAN ,“ MT. POPA ,“ BAGAN
After a stop at the Nyaungoo Market, take an excursion to Mt. Popa, legendary home of animist nat spirits. Later, enjoy a tour of the Bagan Archeological Zone, filled with thousands of stupas, temples and pagodas. Tour some of the most distinctive pagodas as well as Gubyaukgyi Temple, a cave temple with frescoes depicting scenes of Buddha,™s life. Visit a lacquerware workshop and a nearby village before returning to the ship for dinner. (B,L,D)

Day 11Â Â  Â YANDABO
Admire one last sunrise over Bagan before the ship departs for Yandabo, a peaceful village known for its finely crafted terracotta wares. See a pottery-making demonstration by local artisans as well as glimpses of typical village life. (B,L,D)

Day 12Â Â  Â INWA
Today you will visit Inwa (Ava), the capital of the Burmese kingdom for more than four centuries, where you will see the sights in a horse-drawn cart: Mahaaungmyebonzan monastery; the leaning tower of Inwa,, ruins of a 90-foot-high watch tower; and Bargaya monastery, built entirely of teak. (B,L,D)

Day 13Â Â  Â SAGAING – MINGUN
The ship stops today at the former royal capital of Sagaing, famous for its hundreds of monasteries and its tranquil atmosphere. You,™ll visit a silversmith,™s workshop, Soonuponyashin Pagoda, Kaunghmudaw Pagoda and Uminthonese Pagoda, which contains 43 colorful Buddhist statues. Continue on to Mingun, site of a 12-foot high bronze bell and the massive ruins of Pathodawgyi (the unfinished pagoda,), originally intended to be 499 feet high. Although only a third of it was ever completed, it remains the world,™s largest brick pagoda. You will also see Myatheindan Pagoda and its many images from Buddhist mythology. (B,L,D)

Day 14Â Â  Â MANDALAY
After arriving in Mandalay, head ashore for a full-day tour that includes many of the city,™s most iconic sights, including the bronze Mahamuni Buddha, covered by the faithful with a thick layer of gold leaf. Visit the workshops of skilled craftsmen making thin sheets of gold, marble carvings and tapestries, and stop at Kuthodaw Pagoda (said to contain the world,™s largest book, Buddhist scriptures inscribed on 729 marble slabs), Mandalay Hill, and Shwenandaw monastery, an architectural masterpiece filled with wood carvings. Later, take an excursion to the world,™s longest teak bridge, the U Bein Bridge in nearby Amarapura. Tonight enjoy a Farewell Dinner on board the ship. (B,L,D)

Day 15Â Â  Â MANDALAY ,“ DISEMBARKATION ,“ YANGON
After breakfast aboard the AmaPura, transfer to the airport for a short flight back to Yangon. Check in to your hotel and spend the rest of the day at your leisure. (B)

Day 16Â Â  Â YANGON
Bid farewell to Myanmar and prepare for your homeward journey or your optional post-cruise extension to Inle Lake. (B) 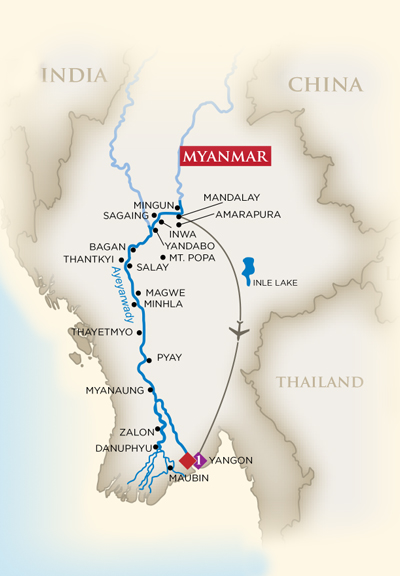