As your ship passes Harbour Heads, you are presented with the shimmering skyline of Sydney – hailed by many seafarers as “the most beautiful harbor in the world.” Two prominent landmarks, Harbour Bridge and the sail-like curves of the Sydney Opera House, grace the backdrop of this picturesque harbor. There is a wealth of adventure waiting in Sydney – from its cosmopolitan city center to miles of beautiful beaches and the Blue Mountains.

Australia’s oldest and largest city was born in 1788 with the arrival of the “First Fleet” transporting 760 British convicts. Today, Sydney is the largest port in the South Pacific and is often voted the most popular destination in the South Pacific. 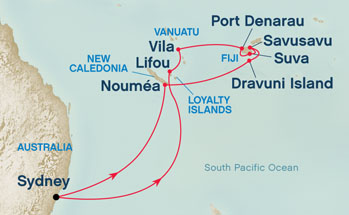