The former capital of New Britain has a history of destruction and resurrection – the city rebuilt after a massive 1937 volcanic eruption only to be destroyed by Allied bombing in World War II. In 1994, the eruption of Mt. Tavurvur dropped hot ash and rock on Rabaul, leading to its partial abandonment. Since that cataclysm, the city has slowly returned to life – hotels have resumed operating, the market continues to trade, and the harbor remains one of the most impressive in the entire Pacific basin.

During World War II, Rabaul served as a forward operating base for the Imperial Japanese Army and Navy. Allied bombing forced the Japanese defenders underground, into a complex system of bunkers and tunnels on the Gazelle Peninsula. 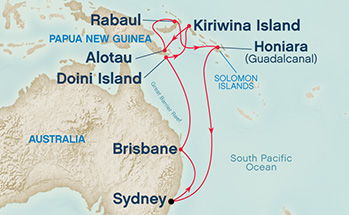