Athens is the capital as well as the largest city in Greece. It is one of the world’s oldest cities, with its recorded history spanning around 3,400 years. The heritage of the classical era is still evident in the city, represented by a number of ancient monuments and works of art, the most famous of all being the Parthenon. Athens is home to two UNESCO World Heritage Sites, the Acropolis of Athens and the medieval Daphni Monastery. SeaDream will embark guests from the port of Piraeus. Should you desire a private arrangement, transfer, or other local service, please see the Land Adventures tab for our destination specialists information.

There is one main town on Hydra, known simply as “Hydra port”. It consists of a crescent-shaped harbor, around which is centered a strand of restaurants, shops, markets, and galleries that cater to tourists and locals (Hydriots). Steep stone streets lead up and outwards from the harbor area. The charm of Hydra town certainly lies in her rich history, beautiful port and waterfront unspoiled by motorized vehicles. The island offers a rugged charm and some spectacular scenes, and makes the perfect place for some self-exploration.

Kotor is a coastal town in Montenegro. The old Mediterranean port of Kotor is surrounded by an impressive city wall built by the Republic of Venice and the Venetian influence remains dominant among the architectural influences. In 1979 the Bay of Kotor, City of Kotor and the surrounding territory have been listed in the UNESCO Heritage as a Cultural Site. SeaDream usually navigates close by the small islands of St. George and Our Lady of the Reef. The Bay of Kotor stretches 28 km and is one of the most indented parts of the Adriatic Sea. It is sometimes called the southern-most fjord in Europe (though it is actually a submerged river canyon called a ria). SeaDream typically docks steps away from the town. SeaDream has arranged a few different Yachting Land Adventures. One of them is a walking discovery and the other will show you the heritage and countryside of Montenegro. For the active guests, there’s incredible biking along the coast as well as a hike up to the fortress. On occasion, SeaDream may dock in the bay and tender directly to the town. We regret that watersports are not allowed in this protected area.

Hvar is a Croatian island in the Adriatic Sea. The island of Hvar is somewhat unusual as it is blessed with a large fertile coastal plain, and fresh water springs. Its hillsides are covered in pine forests, with vineyards, olive groves, fruit orchards and lavender fields in the agricultural areas. The climate is characterized by mild winters, and warm summers with many hours of sunshine. Guests have an option to kayak down the coastline on one of our land adventures or take an independent hike up to the fortress to have some incredible views of the picturesque harbor. You also have an option to bike across the island to Starigrad and meet up with the other guests on the land adventure called “The best of Both Worlds”.

Venice has been known as the “Queen of the Adriatic”, “City of Water”, “City of Masks”, “City of Bridges”, “The Floating City”, and “City of Canals”. Luigi Barzini, writing in The New York Times, described it as “undoubtedly the most beautiful city built by man”. Venice has also been described by the Times Online as being one of Europe’s most romantic cities. Founded in the 5th century, the city stretches across 118 small islands in the marshy Venetian Lagoon along the Adriatic. In 1987 Venice and its Lagoon was inscribed as an UNESCO Heritage site. SeaDream typically docks at the San Basilio pier after navigating by the famous St. Mark’s Square down the grand canal. With its yacht stature, SeaDream vessels are amongst the very few commercial vessels that can navigate this famous waterway. SeaDream does offer Land Adventures when overnighting. You can also contact our destination specialists should you need a private arrangement, transfer or hotel recommendation. 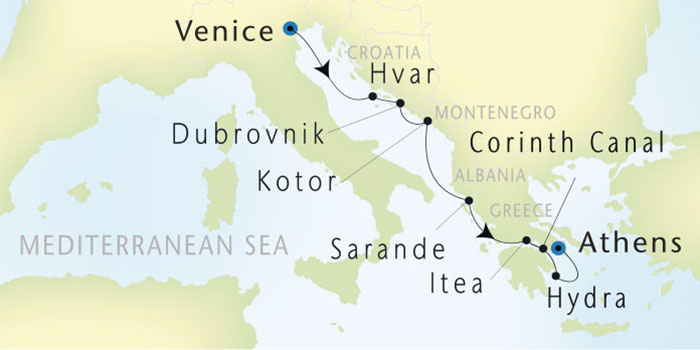