Sorrento is a small town in Campania just south of Naples in southern Italy. It is an extremely popular tourist destination which can be reached easily from Naples and Pompeii, as it lies at the south-eastern end of the Circumvesuviana rail line. The town overlooks the Bay of Naples and is considered the key place of the Sorrentine Peninsula, it allows many viewpoints including Naples, Vesuvius and the Isle of Capri and Ischia. The most popular attraction from here and the absolute “must do” would be to visit the Unesco Heritage Site of Pompeii. Other Land Adventure options include a “hands on” cooking class at the Villa Ida and by special request, you can take a speed bout around the peninsula to Nerano to dine at the Quattro Passi. SeaDream provides a shuttle service to transfer guests from the marina to Piazza Tasso (Main square), although several also take the more active route – the stairs. There’s loads of sites and shopping opportunities here as well as great restaurants, cafes and pizzerias. Perhaps we even have a surprise activity for you as well

Amalfi is a picturesque town in the province of Salerno, in the Campania region of Italy. With its incredible views, it is the main town that makes up the very famous and UNESCO awarded Amalfi coast (Costiera Amalfitana). Amalfi sports some impressive medieval architecture including; its cathedral of Sant’Andrea (St. Andrew), the church tower, the convent of the Cappuccini, founded by the Amalfitan Cardinal Pietro Capuano. They richly represent the artistic movement prevailing in Southern Italy. From Amalfi, we have created two exciting land adventures for you. One to Scenic Ravello and the other to Fascinating Pompeii. You may also choose to play from the yacht’s marina (Permission and conditions pending) or go on a very scenic hike with one of the officers.

Valletta, The Fortress City, is Malta’s capital city: a living, working city, the administrative and commercial heart of the Islands. Valletta is named after its founder, the respected Grand Master of the Order of St. John, Jean Parisot de la Valette. The magnificent fortress city grew on the arid rock of Mount Sceberras peninsula, which rises steeply from two deep harbours, Marsamxett and Grand Harbour. Ottoman forces numbering 40,000 laid siege to the island from May to September, 1565, without success. The heavily outnumbered force of 700 knights and around 8000 Maltese regular troops took refuge in the fortified town on the Grand Harbour. Started in 1566, the city of Valletta was completed, with its impressive bastions, forts and cathedral, in the astonishingly short time of 15 years. The city is busy by day, yet retains a timeless atmosphere. The grid of narrow streets boasts some of Europe’s finest art works, churches and palaces. Walking around Valletta you’ll come across an intriguing historical site around every corner: votive statues, niches, fountains and coats of arms high up on parapets. Narrow side streets are full of tiny quaint shops and cafes, while Valletta’s main streets are lined with larger international branded shops for fashion, music, jewellery and much more.

Capri may very well be the most popular island on the planet? It is a beautiful Italian island in the Tyrrhenian Sea just off the Sorrentine Peninsula, on the south side of the Bay of Naples. Capri town is the island’s main population center. The island has two harbors, Marina Piccola and Marina Grande (the main port of the island). The separate village of Anacapri is located high on the hills to the west. From there visitors can continue up to the highest point Mt. Solero. Besides some simply amazing shopping boutiques, the island has so much to offer including the ever popular Grotta Azzura, Villa Jovis, Giardini di Augusto, Certosa di San Giacomo, Villa San Michele di Axel Munthe and the uniquely shaped Faraglioni rocks. SeaDream has put together most of the sights into one adventure called “Discovering the Island of Love” Kindly check the Land Adventures tab for more information. There’s also some great hikes available on the island, check with the activities team on board for more information. 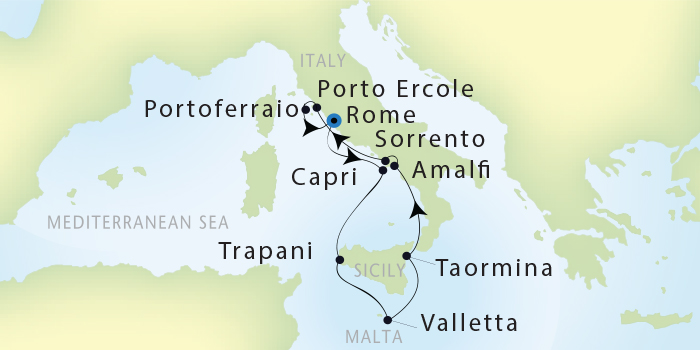