One of the largest and busiest ports in the Mediterranean, Civitavecchia is the gateway to Rome. Rome’s incredible history spans over 2,500 years. Rome has been awarded on of the most-visited cities in the world. Its historic center is listed by UNESCO as a World Heritage Site. Monuments and museums such as the Vatican Museums and the Colosseum are amongst the world’s 50 most visited destinations.

Porto-Vecchio, Corsica is a small port of call in the Corse-du-Sud department of France. The cities popularity increased dramatically since hosting the start of the first stage of the 2013 Tour de France. Just outside of town they have some remarkable beaches. There’s also options for guests to visit Bonifacio as well as the signature golf course Sperone. SeaDream anchors of the harbor and tenders directly to the town center. Water sports will be offered in the morning and afternoon from the marina platform (weather permitting).

Mahón (also known as Maó) is the capital of the Balearic Island of Menorca. The arrival by sea is really incredible as the Captain enters via a fjord like inlet and then turns that yacht around and docks in the heart of the city. The capital has an interesting mix of old and new architectural styles. SeaDream has arranged 4 separate and very unique yachting land adventures that include Golf, Kayaking, Mountain Biking and “Mahon Musts”.

Gibraltar is a British Overseas Territory located at the entrance of the Mediterranean on the southern end of the Iberian Peninsula. Most visitors arriving by sea are impressed by the rock’s huge visual impact. Only covering an area of 2.3 square miles (6.0 sq. km.) there’s several sites that need to be seen. Some of the “can’t miss” options include the Great Siege Tunnels, St. Michael’s Cave, The Moorish Castle, The Lighthouse at Europa Point and shopping – yes shopping. SeaDream docks at the passenger terminal and has the coaches for the land adventures just outside. It is an easy walk downtown to the duty free area. Bikes are available should you want to bike up the rock.

Lisbon is the capital as well as the largest city in Portugal. It is one of the oldest cities in the world . Lisbon has two sites listed by UNESCO as a World Heritage Sites: Belem Tower and Jeronimos Monastery. The city stretches along the banks of the Tejo river. 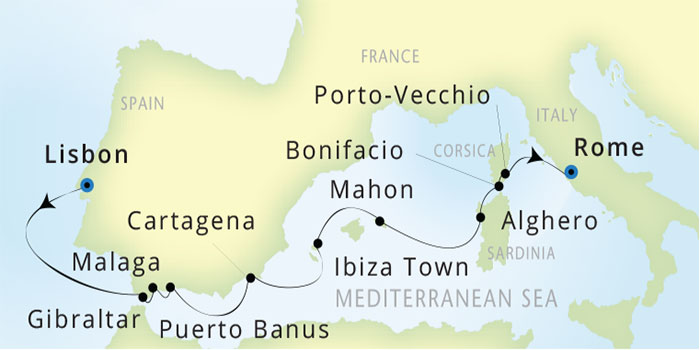