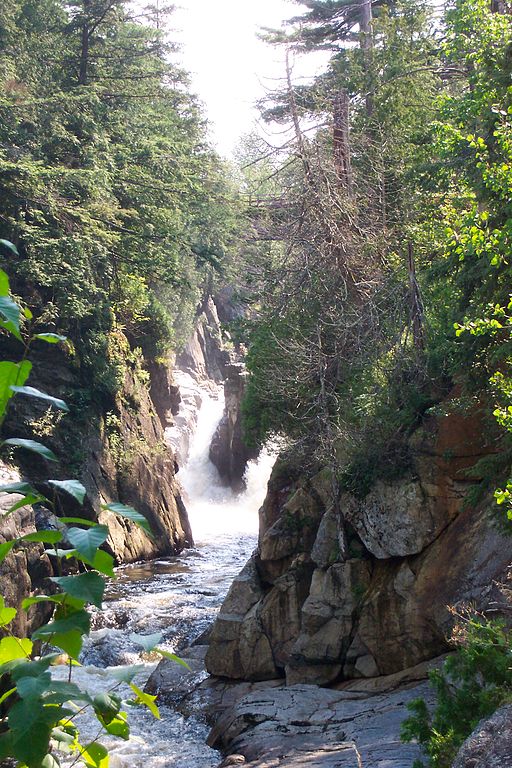 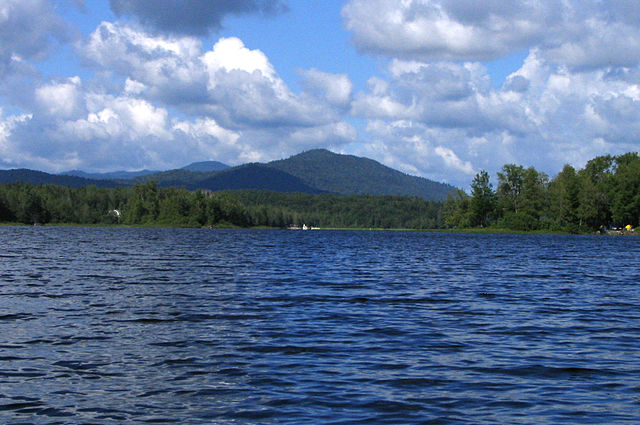 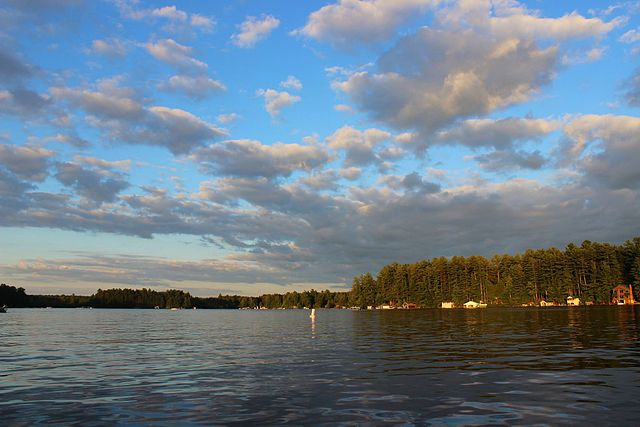 The Adirondack Park is a publicly-protected area located in northeast New York. It is the largest park in the contiguous United States, the largest National Historic Landmark, and the largest area protected by any U.S. state.

The park covers some 6.1 million acres (24,700 km), a land area about the size of Vermont, or of the Yellowstone, Yosemite, Grand Canyon, Glacier, and Great Smoky Mountains National Parks combined.

Much land is directly controlled by the state’s Forest Preserve, but more than half the land within the Adirondack Park is privately owned, including several villages and hamlets.

The Adirondack Park boundary, commonly referred to as the ‘Blue Line,’ contains the entire Adirondack Mountain range as well as some surrounding areas. The park includes all of Hamilton and Essex counties, as well as considerable portions of Clinton, Franklin, Fulton, Herkimer, St. Lawrence, and Warren counties and small portions of Lewis, Oneida, Saratoga, and Washington counties as well. (The Clinton County towns of Altona and Dannemora, despite being entirely within the park boundary, are specifically excluded from the park by statute, due to the large prison facilities in both towns.)

Not all of the land within the park is owned by the state, although new sections are frequently purchased or donated. State land comprises 2.7 million acres (11,000 km), or about 45% of the park’s area, including the highest peaks in New York State, as well as Mount Marcy, the highest elevation in the state. About one million acres (4,000 kmÂ²) of this total are classified as wilderness, with most of the remainder managed under the somewhat less stringent wild forest classification. Villages and hamlets comprise less than 1% of the area of the park; the remaining area of more than 3 million acres (12,000 km²) is privately held but is generally sparsely developed.[3] There is often no clear demarcation between state, private, and wilderness lands in the park. Signs marking the Adirondack Park boundary can be found on most of the major roads in the region, but there are no entrance gates and no admission fee.

The thinking that was to lead to the creation of the park first appeared in George Perkins Marsh’s Man and Nature, published in 1864. Marsh argued that deforestation could lead to desertification: referring to the clearing of once lush lands surrounding the Mediterranean, he asserted “the operation of causes set in action by man has brought the face of the earth to a desolation almost as complete as that of the moon.”

The idea for the park itself first occurred to surveyor Verplanck Colvin in 1870, while taking in the view from atop Seward Mountain. He wrote to the state government that action was necessary to protect the forests or it would be wasted, which would lead to the drying up of the water needed to keep the Erie Canal in operation. Three years later he was appointed to a committee formed to consider how to do this.

While his term ‘Adirondack Park’ led to some derision and fears from longtime residents of the area that they might be bought out and evicted, proponents of the idea began to use ‘Adirondack Forest Preserve’ instead. Both terms continue in use to this day, with the former referring to the land inside the Blue Line and the latter to that portion owned by the state.

In 1878, Seneca Ray Stoddard produced a topographical survey of the Adirondacks that was influential in the creation of the Park.

Serious efforts to protect this land began in 1882, when businessmen in New York began to be concerned about the effects of widespread logging. Without trees, the many steep slopes on the mountains in the region were likely to erode, and the silt from the slopes could conceivably have silted up the Erie Canal and the Hudson itself, choking off New York States economic backbone.

In 1885, legislation declared that the land in the Adirondack Park and the Catskill Park was to be conserved and never put up for sale or lease. The park was established in 1892, due to the activities of Colvin and other conservationists. The park was given state constitutional protection in 1894, so that the state-owned lands within its bounds would be protected forever (‘forever wild’). The part of the Adirondack Park under government control is referred to as the Adirondack Forest Preserve. Further, this became a National Historic Landmark in 1963.

On September 18, 2008, The Nature Conservancy purchased an additional 14,600 acres (59 km2) of land adjacent to the park for $16 million dollars. The group plans on donating the land to the park once the remaining leases for recreational hunting and fishing on the property expire.

Today in the Adirondack Park

Waterfall in Keene Valley.Ongoing efforts have been made to reintroduce native fauna that had been lost in the park during earlier exploitation. Animals in various stages of reintroduction include the American Beaver, the Fisher, the American Marten, the Moose, the Canadian Lynx, and the Osprey. Not all of these restoration efforts have been successful yet.

The park has a year-round population of about 130,000 people in dozens of villages and hamlets. Seasonal residents number about 200,000, while an estimated 7-10 million tourists visit the park annually. It is estimated that 84 million people live within a day’s drive of the park.

It is the largest area without a city in New York State. There are more than 3,000 lakes and 30,000 miles (48,000 km) of streams and rivers. Many areas within the park are devoid of settlements and distant from usable roads. The park includes over 2,000 miles (3,200 km) of hiking trails; these trails comprise the largest trail system in the nation. With its combination of private and public lands, its large scale and its long history as a place people have tried to coexist with nature, many see the Adirondacks as a model for the ways natural areas with human populations can be protected into the future. There are parks in India and other countries that use the Adirondacks concept.

Harris Lake in Newcomb, New York.The New York State Department of Environmental Conservation (DEC) is responsible for the care, custody, and management of the 2,700,000 acres (10,900 km2) of public (state) land in the Adirondack Forest Preserve. The Adirondack Park Agency (APA, created 1971) is a governmental agency that performs long-range planning for the future of the Adirondack State Park. It oversees development plans of private land-owners, as well as activities within the Forest Preserve. Development by private owners must be reviewed to determine if their plan is compatible with the park.

This system of management is distinctly different from New York’s state park system, which is managed by different agencies, primarily the state’s Office of Parks, Recreation and Historic Preservation. While it is frequently referred to as a state park, the Adirondack Park has much more in common with a national forest: it mixes private and public land and has year-round residents within its boundaries in long-established settlements. ‘Adirondack Park’ was Verplanck Colvin’s original term for the area; it and the park itself predate by several decades the formal establishment of state parks in New York.

Just a short note to thank you for your help in sorting out our trip. We had a great time with excellent locations selected. But for the weather in San Fran, it would have been.... Read More