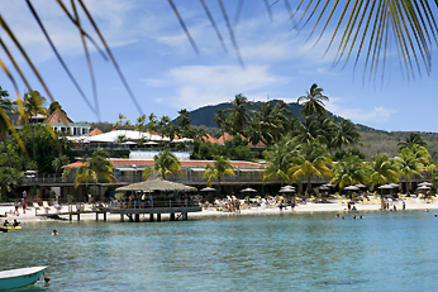 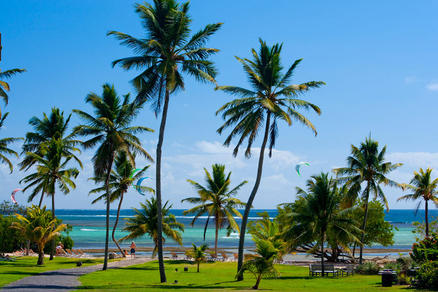 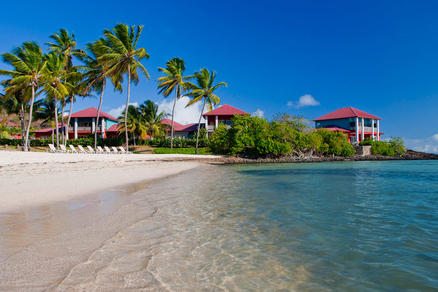 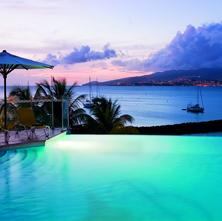 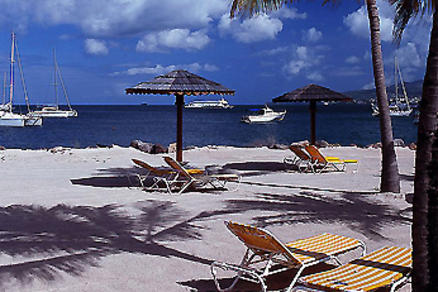 Martinique is the home of Fort de France, a cosmopolitan city with a pace that is fast for the tropics. Fort de France has a population of over 100,000, making it the largest city on Martinique. It is a bustling port city, with a city park called La Savane just off the wharf. La Savane has a now- headless statue of Empress Josephine, first wife of NapolÃ©on and perhaps the most famous person on on Martinique.

It rains every day on Martinique, and the vegetation is lush and gorgeous. Martinique has an agrarian economy, with sugar cane, pineapples, and bananas being the money crops. While Fort de France is on the western Caribbean side of the island, La Trinit is on the eastern Atlantic side.

Like most Caribbean islands, the Atlantic side is steep and subject to heavy surf, but just a few miles to the north it is sheltered enough for swimming. We also swam at the Caravelle Peninsula, which juts out beyond La Trinit and provides shelter from the Atlantic surf. Although none of the beaches here are clothing optional, all are optionally topless. Because Martinique is a volcanic island and rises rather steeply from the sea, it does not have a great many swimmable beaches.

As usual in the French West Indies, the restaurants and lodging are world class. If you want a Caribbean island with nightlife in the fast lane, Martinique is it. Although not many Americans come here, many people speak English well enough that you should have no problems communicating in restaurants and hotels. Some of the out of the way places may be without English, however, so a smattering of menu French is very helpful if you want to know what you’re eating.

Martinique is home to an active volcano, Montagne PelÃ©e, which erupted in 1902, killing everyone in the town of St-Pierre except the town drunk who had been thrown in jail. The ruins of old St-Pierre have been preserved, and a statue of a woman who’s clothes are falling off has been erected to commemorate the victims of the eruption. At the time of the eruption, St-Pierre was the capital of Martinique, and its beauty was such that it was known as the Little Paris of the West Indies. It was totally destroyed along with its 26,000 inhabitants. After the destruction, the capital was moved to Fort de France, where it remains, and the new St-Pierre is a pleasant village with splendid views of Montagne Pele in one direction and the Caribbean in the other.

Roads are very well maintained, and the roadside landscaping is superb. As with all the islands of the French West Indies, the people of Martinique keep a very clean island. Around Fort de France, the roads are divided with two lanes of traffic in each direction. In the northern part of the island, which is seriously mountainous, the roads are sometimes only a car and a half wide; meeting a car, passing, and being passed becomes an adventure, especially at night. The drivers are remarkably good, however, and as long as we let the other drivers do whatever they wanted, we had no trouble — just a few palpitations of the heart.

MARTINIQUE, THE ROMANTIC GETAWAY FOR HONEYMOONERS

Newlyweds follow in the wake of “The Thomas Crown Affair” An island is an island is an island, unless it’s Martinique, the ultra-romantic tropical paradise featured in 1999 MGM film, “The Thomas Crown Affair” chosen as the seductive hideaway to which billionaire Thomas Crown (Pierce Brosnan) flies off with the tempting female investigator Catherine Banning (Rene Russo). Called the “Island of Flowers”, Martinique, a seductive little corner of France in the Caribbean is the perfect setting for engaging into romance. The island combines all the elements of stylish and chic French savoir-faire, with a sensuous and fun-loving Creole joie de vivre.

Blessed with lovely beaches, incredible lush vegetation, idyllic climate and a wealth of cultural, artistic and scenic attractions, Martinique is the perfect destination to savor a unique art-de-vivre and to tantalize your senses.

Newlyweds are well advised to rent a car to take in the island’s sights, to visit the “Balata Gardens” whose paths unfold fabulous tropical flora, the “Balata Church” which was designed after the Sacra Coeur in Paris, and “La Pagerie”, birthplace of Empress Josaphine where sensual love letters from Napoleon are on display.

Many Martinique hotels offer honeymoon packages to fit every budget.